What is a duvet? The word duvet came from a French word meaning “down,” which is a well-known filling material for duvets.

It is a decorative cover with a button, snap, tie, and some with zipper closure that is made to protect your comforter.

At the same time, duvet serves an aesthetically pleasing vibe in your bedroom by creating a matching color theme.

Nowadays, aside from down, duvets are also filled with other natural materials such as feathers and wool; however, do you actually know what a down duvet is?

A down duvet is a specialized comforter just like a blanket or quilt we usually used; however, down duvet is made from insulating materials such as silk, cotton, polyester, wool, and the most popular the down fill, which can keep you warm, especially during cold and winter season. They are also known to be durable.

Many people are still confused with duvets and comforters; however, are these two terms the same?

Well, the difference between duvet and comforter is just minor, yet they are important, especially when looking for, which will work best for your bed.

Therefore, here is a quick comparison between duvets and comforters and their pros and cons.

Duvets vs. comforter: Which is better?

As you can see below is a detailed comparison between duvets and comforter; later on, we will go in-depth details with these two products, and we will talk about their different types, levels of comfort, affordability, and maintenance.

Originating in Europe, a duvet is described as soft and fluffy made from fibers of ducks and geese that its main function is to insulate heat.

In addition to the most common down duvet, these duvets are now filled with hypoallergenic synthetic fibers and other natural fillings such as feather and wool.

They are usually colored in white or off-white. These duvets are designed to be used with a duvet cover, which protects the duvet against dirt, spills, and damage, just like what a normal pillowcase does. They are usually covered with zippers, ties, or buttons.

What’s good about these duvet covers is that they can be easily washed using an ordinary household washer; however, duvet, itself requires special cleaning such as dry cleaning and air-drying only.

Make sure that you read the care label instruction of your duvet to avoid distorting the materials inside.

Compared to duvets, comforters are usually stuffed with less filling materials; therefore, they may look flatter and less fluffy than duvets.

Since comforters are lighter, they should never be used without top sheet or quilt, especially during the winter season.

As mentioned in the table that most comforters can be washed in the machine; however, other types of comforters require only dry cleaning, and they may be bulky and difficult to put inside the washer.

In addition to this, comforters are sold in a variety of colored sheets and different patterns of pillowcases. However, some people prefer using a duvet cover in their comforter, as they believed that it is more effective in protecting their converter against stains, dirt, and accidental spills.

Therefore, you have already known the difference between duvet and comforter, and I am sure that you already have a prepicked in your mind.

However, to ensure that you have chosen the right one, make sure you consider these points before you buy one.

From the comparison above, you can already spot the main difference between duvets and comforters, and it can be summed up like this:

A duvet is designed to be covered, while a comforter already has a built-in cover.

However, understanding these beddings may require a deeper look in terms of different criteria.

Many people prefer comforter than a duvet because of its simplicity and its minimal setup.

On the other hand, a duvet is required to be used with a cover on which a lot of people are having a hard time with.

Therefore, when it comes to ease of use, comforter is the best!

It was mentioned above that both duvets and comforters require professional dry cleaning, especially when they are made of sensitive materials.

However, a duvet is much better than a comforter when it comes to cleaning and maintenance since duvets have covers where you can strip it off right away and toss it inside the washer.

Be mindful that when you plan to buy a comforter or duvet for your bed, make sure you also consider your habits such as eating breakfast in bed, or you have pets that love to jump on your bed that can contribute to stains and spills.

Duvets and comforters both ranged almost the same price; however, since duvets need duvet cover to work, you still need to buy a duvet cover, which can add up to your total expense.

The bad thing about these duvet covers is that once they are damaged and had some heavy spills, it is impossible to bring them back to their original quality and needs replacement right away.

On the other hand, for comforters, though they may also require replacement after serious damage from wear and tear, this type of bedding material comes in a bundle and sold in sets together with bedsheets and pillowcases.

Therefore, instead of buying items in separate purchases, which will cost you more, try to shop for items that come in sets and bundles.

For people who love to spice up their bed and change bedroom decor often, choosing duvet over a comforter might be the best choice to do since you can just change your duvet cover instantly and blend it in with your bedroom décor.

Generally, a comforter is thinner and less warm than a duvet. That is why a lot of comforters come with quilts, thicker blankets, and top sheets during the cold season.

On the other hand, duvets are loftier, heavier, thicker, and warmer than a comforter. They are really designed with a cover since duvets can function without putting extra blankets for more warmth and additional comfort.

Overall, a duvet is better than a comforter when it comes to maintenance, style, and the warmth it can give to sleepers. Hence, you can see below the different types of duvet and compare which is the best among them all.

Hollowfibre and down are the two most well-known duvet filling, though you can also find duvets made from silk, wool, and some microfiber. Therefore, listed below are the different duvet fillings and their respective pros and cons.

It is no wonder that down duvets are the most popular type of duvet filling because of its coziness, lightweight, and its good insulating property that can retain heat while keeping you from sweating at night.

They could last for longer years if they are properly cared for and maintained. Usually, duvets are combined with a feather to make them plushier and fluffier, which can provide better insulation.

To ensure that the feather and down came from an ethically sourced manufacturer, you can check their policy if these fillings are taken from a humane way.

The only downside of this natural duvet filling is that you should not wash them at home since their fillings will be easily lost and damage once they are dried afterward.

For proper cleaning and maintenance, down duvet requires professional dry cleaning only. 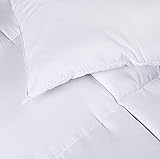 These types of duvet fillings are made from synthetic materials that are a perfect choice for sleepers who suffer from allergies because they are hypoallergenic.

Unlike down duvets, hollowfibre duvets can be machine washed regularly; therefore, these duvets are easy to maintain and clean.

However, these duvet fillings do not last long, unlike duvets filled with natural materials such as down, silk, and wool that can last up to ten years. 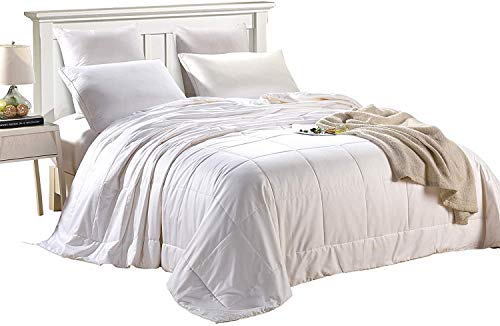 Silk is known to be hypoallergenic; therefore, when used as a filling material in a duvet, they are ideal for sleepers with sensitive skin and those who suffer from skin asthma and allergies from dust mites.

Just like any other natural fillings, silk duvets require professional dry cleaning for its cleaning and maintenance.

Wool is the least common type of duvet filling. It is almost similar to a down duvet when it comes to price and its ability to retain heat and keeping you warm, especially during cold weather.

However, unlike down duvets that some people are allergic to, wool duvets are naturally hypoallergenic and are good in keeping away dust mites.

Wool is eco-friendly since it is biodegradable, sustainable, and renewable, and locally produced wool came from sheep that are taken in a humane way.

Just like down and feather duvet, you can check the manufacturer’s policy in regards to this. Nonetheless, be cautious when washing wool duvet since it can deteriorate at high temperatures.

Microfibre and Hollowfibre duvets are two different duvets filling; therefore, there is nothing to worry about for any confusion.

Microfibres have finer fillings, and it’s just like a synthetic counterpart of a down duvet, but it does not have a hollow space that hollowfibre duvet has.

Microfibre is considered as one of the lightest duvet fillings, and some people find this beneficial since it will not feel heavy as you sleep.

While it is comparably similar to a down duvet, however, down is way cheaper and lighter than an authentic down duvet.

If you always prefer a natural feel duvet but looking for a cheaper and a lighter one, then maybe a microfiber duvet might be worth for a change!

However, there are some helpful tips on which you can do to keep them fresh and clean; therefore, keep on reading for more information about proper handling of down duvets.

How To Care For Down Duvets

Just follow these simple tips to keep your down duvet clean and fresh for years unless an accident happened.

For accidental and small stains, here are the gentle reminders so that you would not end up running your down duvet.

Yes, it was mentioned that down duvet requires professional cleaning only; however, if you really wish to clean your duvet by yourself, here is a guideline on which you can look if ever you DIY clean your down duvet.

Once you are done washing the down duvet, make sure you rinse it thoroughly. Rinse the duvet twice or thrice times to remove any soap residue as this can cause more problems such as stains and a loose loft for your down duvet.

Due to the size of down duvets, most household dryers and washers cannot handle the load properly.

Drying of a down duvet will take at least several hours since the dryer will only be set to air-fluff or extra-low heat mode.

To speed up the drying process, you can also toss some dryer balls as this works by allowing air to flow in between the folded layers of duvet while tumbling inside the dryer.

Once the time has passed, check the down for any clumping, as this is an indication that the duvet still has soap residue, what you need to do is to repeat step 2, which is re-rinsing the duvet and re-dry it again.

Generally, duvets are needed to be cleaned only every three to four years UNLESS accidental spills or stains occurred.

Due to this infrequent need for washing, a duvet is recommended for general cleaning by professional dry cleaners or commercial laundry service that offers dry cleaning.

This will guarantee you that no damage will happen to your down duvet instead of risking its quality through washing it by yourself.

In addition to this, here are some additional care tips that will surely help in maintaining your down duvet in good quality.

Image by engin akyurt from Pixabay